Brexit and The NHS 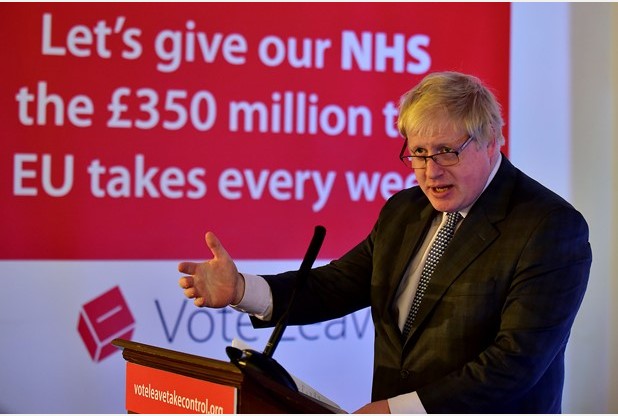 Today I was introduced to someone extraordinary: a newly recruited nurse who is not from continental Europe, but from the UK - Taunton to be more precise. In the hospital where I work 20% of the registered nurses are from overseas, the majority from the European Union (EU). Chatter in the common room is a mongrel mix of Spanish, Italian, Greek and even Catalonian. To help them communicate with our local population I have encouraged them to use some West Country expressions. Hearing a nurse from Barcelona tell the patient that we have done a ‘proper job’ always makes us giggle.

In his commencement address at Yale University in 1962 John F Kennedy said: “The great enemy of truth is very often not the lie; deliberate, contrived and dishonest, but the myth; persistent, persuasive and unrealistic…”

I doubt that many voted to leave the EU because they really believed that this would result in a massive cash boost for the NHS, but this is precisely what was promised. Up to £350 million per week extra was promised at one stage of the campaign. This was downgraded to £100 million per week later on when the leave campaigners realised the sums did not add up. And as the referendum day drew near this amount was reduced even further or not discussed at all. Now that the vote to leave has been won and our new Prime Minister clearly intends to follow Brexit through, no one in power is talking about extra investment in the NHS.

According to an analysis by the independent think tank, The Health Foundation, any potential savings the UK might make in payments to the EU “would be more than cancelled out” by the economic consequences of leaving. It said that even if the UK remained in the European Economic Area (EEA) after leaving the EU, the NHS could have a funding shortfall of at least £365m a week. But if the UK does not remain part of the EEA, the report said that this could be as high as £540m a week. Anita Charlesworth, director of research at the Health Foundation, said: “The recent decision for the UK to leave the EU will create additional challenges both in terms of finances and the ability to attract and retain valuable European staff. It is widely anticipated that leaving the EU will lead to lower economic growth, and when the economy sneezes, the NHS catches a cold. The NHS is already half way through its most austere decade ever, with finances in a truly dire state—it cannot afford to face another hit.”

Despite these dire warnings, the government has consistently reassured us that the NHS is adequately funded (it isn’t), adequately staffed (it isn’t) and the cause of the huge deficit is lack of ‘financial discipline’ (it isn’t). Patients are given high expectations (such as seven day access to a GP) and then encouraged to complain when they fail to materialise.

The Health Foundation report highlights that the NHS is short of 28,000 nurses, 2,300 consultants and 2,500 junior doctors. The EU has provided rich pickings for employers looking to fill vacant nursing and medical posts. So can we expect our new Prime Minister to encourage overseas recruitment? It seems unlikely. The Daily Telegraph described her speech at last October’s Conservative Party Conference as a cynical bid to scapegoat immigrants, whip up anger at foreigners in order to win support as a leadership candidate.

If you voted to leave the EU to reduce immigration, how did you think gaps in hospital staff would be filled? We certainly cannot do it from our local population. Even if we massively expanded medical school places in the UK today, we would not see any expansion in home grown hospital consultants or General Practitioners until 2033 at the earliest. There is understandable concern amongst the EU workforce already working for the NHS as to what will happen after Article 50 is triggered. People are planning their futures and thinking about where they want to be in two to three years' time and I doubt they will wait to find out. We need to move on from simply reassuring our EU workforce that they are valued to giving them some security and certainty should they choose to remain in this country. If we don’t we could see a lot of people who are already here leaving. And it seems certain that many EU nationals who were considering a future working in the NHS will think again. And if you voted Brexit for a much-needed massive cash injection for the NHS you may well see exactly the opposite. All the talk now is of further cuts in public spending.

JFK concluded his address: “…too often we hold fast to the clichés of our forebears. We subject all facts to a prefabricated set of interpretations. We enjoy the comfort of opinion without the discomfort of thought”. If you had the chance to vote again, would you still vote leave?