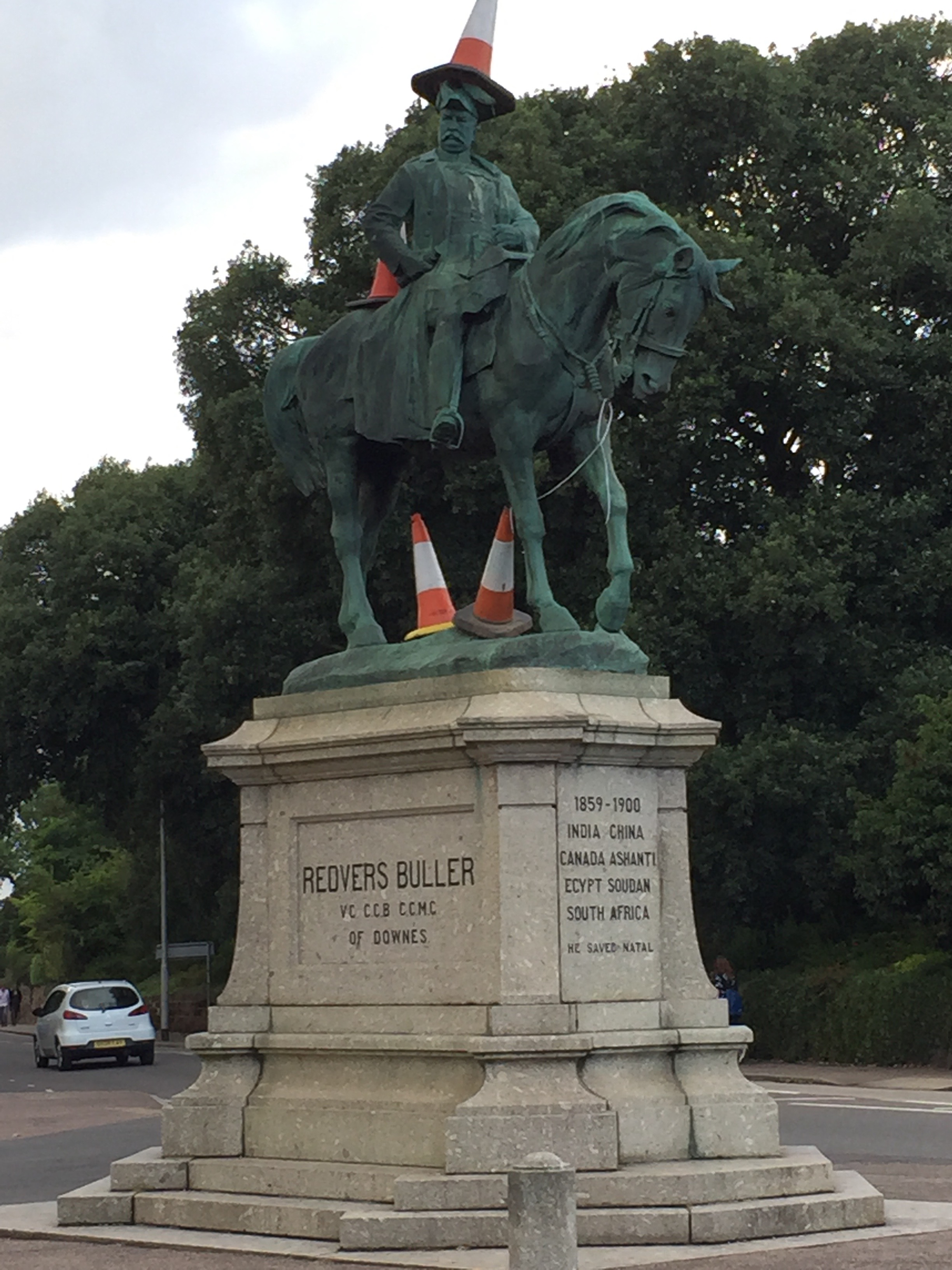 If you ignore the saintly carvings on the cathedral wall, you can count the number of statues in Exeter on the fingers of a deformed hand. Yet one member of this elite group and possibly the most prominent figure isn’t even an Exeter man. I pass Redvers (pronounced Reevers) Buller almost every day on my way to work, sitting proudly on his horse adjacent to Exeter College, but at times he is a sorry site. A few weeks ago he was garlanded with a blazing orange tutu and carried the best part of a rowan tree over his shoulder. His horse, ‘Biffen’ sported the ubiquitous traffic cone on his ear. It might seem like a cruel fate for such a senior ranking British army officer, but there was a time when he was described as ‘…one of the bad jokes of Victorian military history’ because of his tactical ineptitude in the Boer war. The positioning of his statue now seems like another strategic blunder, parked on the main route between Exeter city centre and the university campus. The challenge to mount the pedestal of Cornish granite, scramble up Biffen and plant a trophy on Buller’s noggin must seem irresistible to students returning from their nighttime revelry.

The Buller family seat was originally in Morval in Cornwall and they owned extensive land in both that county and Devon. His home was in Downes, Crediton and it must have been a blow for the ‘Kirtonites’ of 1905 to see the statue unveiled with Biffen’s rear end facing their hometown. He fought in many campaigns including; the second opium war, the Ashanti campaign, the Xhosa wars, the Anglo-Zulu war, the first Boer war, the Egypt campaign, the Madhist war and the second Boer war. He was awarded the highest military honour for valour during the British defeat at the battle of Hloabane during the Anglo-Zulu war. However, his heroism as a junior officer was overshadowed by later failings, he was described by one historian as “…an admirable captain, an adequate major, a barely satisfactory colonel and a disastrous general”.

Even so, you may feel that the students should show more respect to a war hero. For all his failings as a military leader, you don’t get awarded the Victoria Cross for doing nothing and more recent historical texts suggest that his skills as a military leader have been harshly judged. But I suspect he is a stranger to most of the passing students, representing a time of Empire, colonialism and stark social division. Perhaps it is time to replace him with a contemporary and true Exeter hero, but who? It is a real struggle to think of suitable candidates. My vote would be for another military man: Trooper Jack Sadler born in Exeter and killed in the war in Afghanistan in 2007. This might seem a strange choice for a statue on a major student thoroughfare and there are many who may feel that his sacrifice was in vain, but not me. He fought men who believe that women who aspire to improve themselves through education need a bullet in the head rather than a place in college. He was 21 years old when he died, so by virtue of age alone he would be a recognizable figure for the passing students. Also he was an old Exonian, whereas Buller was an old Etonian. His statue would be a fitting tribute to the brave young men and women who have been killed in this conflict and from what I have learned about Jack, he would definitely see the funny side of a traffic cone on his head.