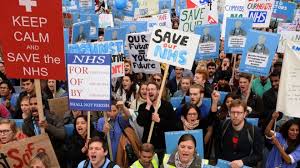 The government seems to be dismantling our treasured health service

There is never a good time to be sick, but if that is your destiny, I suggest you do it sooner rather than later. Why? Because there is a perfect storm brewing and if your illness is bad enough to need admission to hospital, there is every chance you will get caught up in it. Firstly, so-called ‘winter pressures’: the inevitable influx of emergency admissions that swells our hospitals is about to start. Despite attempts to stem the tide, the number of admissions increases year on year. So much so that hospital managers have been forced to invent a state of readiness beyond ‘red alert’: they call it ‘black alert’. What lies beyond black is anyone’s guess, but when your hospital is already bursting at the seams it is hard to imagine things getting any worse, but they can. During black alert, all non-urgent admissions are cancelled to make room for the emergencies. If you are unfortunate enough to be admitted to hospital during a black alert, you may find yourself on a ward staffed by a highly skilled team of nurses, doctors and therapists, it’s just that they are not necessarily skilled in looking after your ailment. It’s rather like a football manager asking his top striker to act as goalkeeper for a while. He might be OK, but he is not really playing in his best position.

Secondly, cuts in funding to the NHS (The government calls this £22bn of ‘efficiency savings’ have left the regions hospitals massively overspent. This is a situation hospital trusts clearly want to avoid (the penalties can be severe) but when you have already trimmed off off all the visible fat, what is there left to cut? If you reduce the number of frontline staff, you pose a risk to patient safety and if you fail to satisfy a Care Quality Commission inspection you may find your hospital subjected to ‘special measures’, something to be avoided at all costs. To compound the situation, cuts in social care funding are having a significant negative impact on the health service. About one quarter of all patients who are admitted as an emergency are detained in hospital despite being medically fit to be discharged, there is simply nowhere safe for them to go.

And finally, the junior doctors who will attend you if you are admitted to hospital may be about to go on strike. And I wouldn’t blame them if they did. From August next year the government intends to impose a new employment contract upon them that will extend their standard working hours and reduce their pay by up to 15%. Those who work unsocial hours providing emergency services will be hit the hardest. Even if they decide not to strike, do you really want to be seen in your hour of need by doctors who feel exhausted, undervalued and demoralized? If we continue to treat our doctors in this shabby fashion, the exodus from this country will accelerate. There are already about 500 trainee emergency doctors who qualified from UK medical schools working abroad (mostly in Australia and New Zealand). More than 90% of these have no intention of returning home. A quick glance at their working conditions, their prospects for training and their quality of life will make you understand why.

Those who choose to stay in this country have already seen an attack on their pensions such that junior doctors face the prospect of having to work well beyond the age of 65 and pay higher contributions. Also a heavy-handed approach to the introduction of seven-day working for hospital consultants (as if most of us are not doing this already) has made them feel enough is enough.

Although this government repeatedly states its commitment to the NHS, it appears to be systematically dismantling it. Behind a smokescreen of good fiscal governance, it is starving hospitals of essential funding, claiming that more efficiency measures are all that are needed to maintain (indeed improve) standards of care while selling off the profitable bits to the private sector. Yet the UK spends just over half as much on health as in the privately funded system of the USA and still (despite ‘Obama care’ a significant proportion of their population have no access to the sort of healthcare that we take for granted in this country.

So is there anything you can do? Well, bear in mind that this government has a slender majority of 12 seats. It would only require a minor backbench rebellion to make them think again. So why not write to your MP today? Unless you live in Exeter, he or she will be a member of the ruling party. Let them know how you feel about the disintegration of our public health service. The NHS is a national treasure to be cherished. Over the last few years this gem has become rather tarnished, but rather than buff it up it looks as if this government is determined to prise it out and send it to the pawnbrokers. So stay healthy this winter, if you can.